How to hang a young man until he's dead

Unfortunately if you're born with this mug 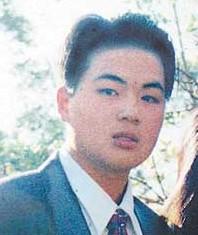 The impending death by hanging of Nguyen Tuong Van, 25 year old Aussie, has of course attracted the same press attention as the Corby and Bali 9 cases. You all remember the day he was sentenced, don't you?

OK, in fairness there's been some cross-party movement in the past few days, and it's probably true that a longer-and-stronger campaign driven by the kind of public pressure someone blonde and titty would have aroused would not have changed Singapore's mind.

But the striking difference in the way "Australia" has reacted speaks for itself.

Meanwhile, on the gory details, there's a blunt piece in The Australian that will fill you in on the noble art of hanging a human until they're dead. Here's the executor's summary:

Once the prisoner is collected from his cell shortly before 6am, speed is of the essence. The longer it takes, the greater the opportunity for panic and struggle.

A hood is placed over the prisoner's head and his hands are pinioned behind his back, usually with handcuffs. His legs are bound together with wire to prevent him kicking out and catching them against the sides of the trapdoor.

The rope, attached to a concealed beam, is positioned around the neck and the trapdoor lever on the execution platform is pulled. The clunk of the wooden doors echoes around the chamber.

If everything goes to plan, the strike force of the noose will dislocate the neck at the second and third cervical vertebrae, the classic hangman's fracture.

The prisoner will enter complete neurogenic shock, unable to process pain, although electrical activity may continue in the brain for several minutes after the spinal cord is cut.

Those damn humans, trying to hang onto life down to the last living organ.

In Singapore the issue is rarely debated, the country's low crime rate being seen as sufficient justification for capital punishment. Abolition, it is said, would send the wrong message to criminals who may interpret it as an indication that the Government is going soft on crime.

Of course anything short of breaking someone's neck would be seen as "soft".

By a homocidal maniac.
Posted by Armagnac Esq at 5:39 pm

I read that Australian piece and it should be widely distributed to everyone who casually mentions capital punishment. Totally barbaric and utterly disproportionate to the crime.

Now, on your introductory angle.

Two things. First, Canberra officialdom - the PM, Downer etc - as well churchmen like Pell (who has been protesting about this for many months), have done quite a lot - probably as much as possible. I'll stand corrected on that. Michael McAuliffe probably received less attention in '93.

Second, I agree with you that commercially generated outrage would have been ramped up for an Anglo - especially a telegenic one.

I've seen Nguyen's Mum on the news and her heartache is very upsetting.

My first visit to this site in a while (is it the same one as before?) and I must say it's really good.

If I'm not mistaken I hold the honour of being the first person to tell the author about this strange new thing called "blogging" just over three years ago.

I explained the idea to him and if I remember right he didn't seem too impressed. Now he's an addict. Maybe I'm in the wrong job. I should be dealing drugs.

Pk is correct. Thanks for the compliment!

So, PK when are we going to collaborate again?

CL we seem to agree, although I'd say officialdom appear to have ramped it up quite late in the piece, but I acknowledged good cross party work now being done.

Yes, Pell has been hard at work too. I think Neil MItchell may even have weighed in on the side of good!!

Whilst I am also adamantly against the death penalty in any case I disagree that the public's opinion would be much different were this guy to be a "looker", I believe it had more to do with Corby's family and legal team courting the media than anything else. There are heaps of other drug cases happening in the world at the moment that aren't splashed all across the media, which also include young innocent looking females.

I never said he wasn't a looker...

He's Asian, so is Singapore. They'll hang their own, as well as ours. And good for them. Mules, dealers, I'd hang them all. Good looking dames? Who cares. There's no shortage.

We could boycott Optus and Singapore Airlines as they are both own by the Singapore Government.

you will have to forgive me for assuming that considering the people you compare him to in the photos, if you mean the fact that he's Asian that didn't register with me

Fair call- I was going to put a pic of a nice old chap in tweed, but saw two blue blooded looking shots on the Home and Away site and thought f*ck it.

you think the drug traffickers would try and stop using young people all the time, because Asian, Caucasian, hot or not, young people will permanently be on the radar, justifiably, of various policing and security/intelligence bodies...