OK, we've been fleeced from one end of Ha Noi to the other.

It started when we arrived at the first hotel we wanted to try. A guy peers in, looking all official, and asks if we have a reservation. We say no, he says there are no more rooms however they have a new hotel a block away, similar quality. He has a professional looking card with the 1st hotel's name, and a map showing the new hotel. We go there. It's a dump, we got screwed, we hear later that they've got a reputation as hustlers. Lonely Planet letter #1.

The boat was pretty crap. I didn't realise how crap till we stopped next to several other tourist boats while visiting a cave.

The cave has this rock, it's called Uncle Ho's Finger, and it looks like a huge fat cock with balls under it. Incredibly as I pissed myself they kept straight faces, and I realised they really DO call it his finger.

We paid $300US, supposedly to get a premium tour. Everyone else on our hock-job paid around $30-50US each. I'm going to lose my fucking rag in the travel agent in Ha Noi. If they don't pay some cash back I'm sitting on the front step and disabusing every other sucker who walks up until they change their minds.

Oh, yeah, the rats. Our room on the boat. I'm pissing, I hear a scream. Something the size of an alsatian has sprinted along past beloved's head. She runs out, I stay in the room changing. With my jeans half way up I hear a scuttle, I freeze. Something huge races along behind the curtains, a few inches away from my face. There is more scuttling near the door (it runs through a hole) and another scream, as it confronts beloved and other passengers in the ship's lounge.

After having words with the fuckwash who sold the trip, we're booking in five star.

Anyone thinking of Ha Long Bay- book in Australia so you can sue the miserable turds if they fuck it up.

Oh, otherwise, having a lot of fun, the bay itself is superlative, sea-kayaking up against the sheer limestone cliffs in the evening, with the water flat and black and no wind, incredible.
Posted by Armagnac Esq at 5:14 pm 4 comments:

Fall of the individual poliblog?

So I'm sitting here sipping another tiger beer and of course my mind hasn't let go of blogging. The great addiction.

I've documented much in the lead up to my wedding, perhaps the essence of the purpose of this site. It has been carthartic, I met readers who don't frequent the political morass I'd previously played in.

Out in the lefty mainstream, blogging is dominated by large group blogs. Larvatus, Stoush, WSA caucus. They're good, but as excellent individual bloggers like Liam throw their hats into the collective ring I wonder if part of the character of blogging isn't slipping away, the individual personalities of the blogs. Writer/editors taking control of that which was previously left to the individual, flicking through their favourite voices.

No-one in the left has managed to approach the consistent, vicious but effective voice of Mr Blair (the Tim).

Is this evolution, or is there a gap? I'm married now, have made a new career direction, and am planning to get the net installed at home so I don't have to do all my blogging over a quick coffee before work or at lunch.

I'm ready to get it on, but I wonder if the time of the tight, individual, personal voice in poliblogging is over... except for the alpha-few.
Posted by Armagnac Esq at 8:56 pm 18 comments:

Just a few words by way of update. I'm not able to open the proper site here, I'm only getting to see the blog via the draft function. I wonder if Uncle Ho has decreed that 'blogspot' is a naughty word.

Picked up my suit. Yesterday I got measured up, today it was ready. Can't tell if the stitching is rubbish, but it looks good, I had her do the bold-stitched Paul Smith style, she pulled it off well, the wool is a deep multiple navy pin stripe and the cut is, well, superb.

Ordered a couple of 'Goodfellas' style shirts on the back of that job. I'm going nuts.

Dusk falls in Hoi An, I am wed, I am happy

I sip Tiger Beer. I check the broad wedding band, screwing it round and round behind my knuckle. I look past the screen out the window as dark rolls over the river.

Should I tell this backwards, starting most recently? At the markets, being sized up for a $60 suit by the cackling woman who kept slapping me on the butt- unnervingly accurate with her cupped hand I noted. At dinner, last night or the night before, eating soft shell crab and various other things but oh my the soft shell crab was good! You eat it whole, little crunchy legs and all, coated with a thin respectful batter and nicely seasoned. Down in the tunnels at Cu Chi, ears still ringing from sending a clip from a captured US M-60 into a cardboard tiger at the end of the firing range. Or back at the wedding itself. The band, how good were they, the best Police cover you'll ever hear, the cake, friends partying hard.

Me breaking into tears almost as much as beloved. When I looked at her I cried. She squeezed my hand and I cried again.

I cried during her speech, and I cried at the end of mine. I just gave her a list of things I love about her, then I said:

I sang to her, it was the big secret. I did it with the band, a blues I wrote that has a nice ending.

OK, OK, you really want to know about Vietnam, no? How about the war crimes museum? Little deformed babies preserved in jars ('agent orange'), sympathetic pics of GIs in mud or hanging dead from ropes below helicopters.

Or Cu Chi? Maybe the best tour I've ever been on. We saw the leg traps designed to send metal spikes into you 8 different ways. Yes, I paid about $20 to fire a belt of M-60 heavy duty machine gun rounds on a range. It scared the life out of me, let alone being at the other end. I raked the ground, it flew up in bursts of dirt, the sound was incredible. The M-60 fires heavyweight rifle bullets at ten rounds per second. It kills. Fearsome, sobering.

My guide was such a nice guy, and the army regular who went down in the tunnels with me. We did the main tourist tunnel, widened to accomodate americans, then they took me to another dirty dark little tunnel. I barely fit. I crawled, fast, about 60 metres in pitch darkness. When I came out I was drenched in sweat and hyperventilating.

The Vietnamese lived under there for a couple of years, only coming out to fight.

Have to say, they're very magnanimous about it, keep thanking me for Paul Keating's friendship bridge!

Scorpion and Spitting Cobra wine isn't as bad as it sounds, either.

The night calls, the tropical heat is making me amorous. More posts soon, sorry about the hiatus.

Tomorrow, the groom is stripped bare...

Mum: He doesn't have a brother.

They were both so embarrassed, poor things. Thankfully when I heard, at my bucks, I was already pissed so I cracked up laughing.

My bucks was at pubs, drinking and enjoying fine conversation rather than watching waxed pink bits. Some of the lads tried to pick me up and carry me somewhere near the end, but after I'd inflicted various injuries with my knees, elbows and teeth they realised that I meant it when I said I'd draw blood before they took me anywhere.

And this is it. The last vestige of my youth about to be signed away forever.

Young Entrepreneur of the Year 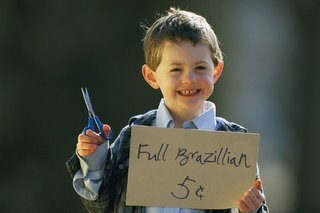 If this tyke was my kid, I'd be a proud dad!

I've thought this many times, and now Barnaby Joyce has queried whether businesses with over 100 employees will artificially attract the unfair dismissal exemption by use of dodgy accounting structures.

Can I add- I wonder how many people realise that for these purposes Starbucks, McDonalds, 7/11 and other multinationals are likely to be exempt, because the business, I'd wage money on it, is defined to be the individual franchise.

How many people would support the idea that McDonalds gets an exemption for being a small business?

I haven't had time to fisk the legislation, so please correct me if I'm wrong.

Meanwhile we should ask why Labor have not been identifying this, don't they remember the Waterfront Case which involved the same sort of form-over-substance chicanery?

Beazley and Combet are right that this is a fairly small part of an overall monster attack on workers. However they appear to be underestimating both its potential for exploitation and how much it might piss Joe and Josette Average off to realise they are being hoodwinked.

Meanwhile, as usual, the Speaker is busy abusing his power to advantage his party.
Posted by Armagnac Esq at 2:19 pm 2 comments:

It's love-of-my-life's 30th today. I got her a hamper with chocolates and Moet, a bottle of desert wine, a CD with "Your Gorgeous" - which we've sung at each other on numerous drunken occasions - on it, and a couple of bottles of Givenchy pooh-bah.

Today she goes to Oaks with the girls while I stew at work, then we'll dine out in the 'cote tonight.

We hooked up properly the night of my 30th in London. A few days later we were in love. A few days after beloved's 30th we'll marry. Maybe 30 has magic properties for us....
Posted by Armagnac Esq at 9:18 am 3 comments: