First we need to have a clear understanding of terrorism. That's when you kill civilians with the aim of terrorising your opponents into giving you what you want, isn't it?

Good. Scroll on down.

In response to the capture of 3 soldiers Israel has rightly, and with a sense of proportion firmly in place, invaded two of its neighbours and given the terrorists a taste of their own medicine.

Look, this terrorist got their comeuppance: 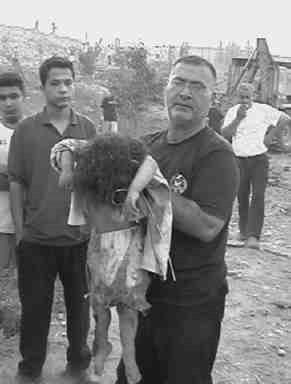 Don't come that crybaby crap with me; she may be small, but she was a key player in Hezbollah!

This one looked much bigger without the bodybag: 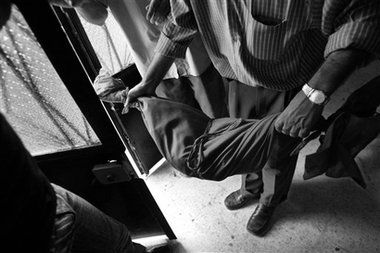 And here, a whole bunch of terrorists: 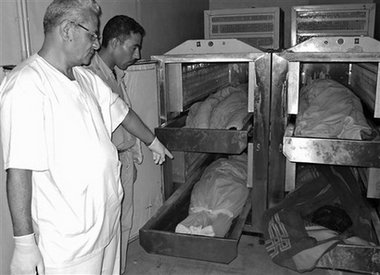 And don't go telling me I can't count, this is clearly a fair trade for 3 captured military personnel.

And any comparison to the SS practice of killing civilians in response to Partisan attacks in WWII is just offensive anti-Semitic twaddle!

I can feel peace, its just around the corner...

What happened after Israel pulled out of Gaza last year?

What happened June 25? The democratically elected government of the PA (Hamas) supported an action involving the digging of a tunnel under its border with Israel, from which a group emerged who killed 2 soldiers and kidnapped a third.

Hezbollah has also involved itself in this "kerfuffle", by killing several IDF soldiers and kidnapping 2 also.

Hamas and Hezbollah both have a tendency to hide rockets and "insurgents" in residences and within groups of civilians.

Hamas and Hezbollah also have the tendency to target schools and hospitals. Either with missiles or suicide bombers.

When will it be okay for Israel to retaliate?

It is inevitable that children will die or be maimed in these conflicts. One side deliberately targets them, and then hides amongst them.

It makes for great copy, and is a cynical and disgusting ploy.

Armaniac, it's going to get a lot bloodier before it gets better. Israel has been restraining herself for a long time. And against outrageous provocation.

I don't have the patience that the Israelis have.

You shouldn't, either. Go read your quran.

Yes, Armaniac, you lover of terrorists, you must be an Islamic extremist if you think that Israel shouldn't be bombing little children.

"When will it be okay for Israel to retaliate?"

When? I think when their retaliation is proportional to the original crime. But that’s a ridiculous question – nobody has said that the actions of Palestinian or Hezbollah extremists are “okay” either.

Carefully target the protagonists in a manner that minimises, though it can't ever rule it out entirely, the killing of civilians....maybe.

scary pix of the world we live in....