Earlier, at least 51 people were killed in Israeli strikes in Lebanon and 10 more bodies found, pushing the death toll from the Israeli offensive to more than 200 over the past six days.

Separately, Hezbollah announced the death of one of its fighters, bringing to four the Shi'ite militant group's losses since the start of hostilities.

Four members of Hezbollah out of over 200 dead, and the Right continue to claim this is carefully targeted self defence?

Here's an image which the Right would use to 'prove' that all Muslims are hateful terrorists in the making, if only it showed Muslims: 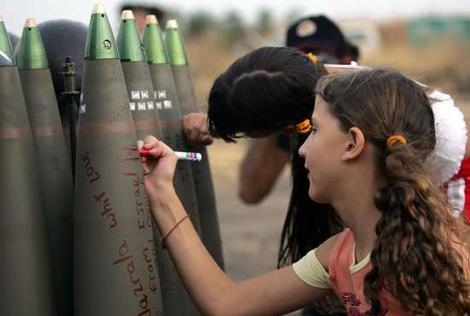 Messages in Hebrew for the kids about to be blown to pieces at the other end, hat tip SMH.
Posted by Armagnac Esq at 3:56 pm

I find this image so obscene that it should never be given publicity. This is how this stupid conflict will be perpetuated, by indoctrinating children and by both sides doing so.

There is lots more and worse on the other side. When I see a bit of it here I might take you seriously again.

Any other news from Hezbollah you'd like to relay Armaniac? Stock tips, racing guide, Ashes predictions?

Just a word of advice (quiet like): if you get an email from a Nigerian offering you the chance to increase your investment 10 times over - don't respond. It's a scam.

And don't buy Viagra from unsolicited spammers either. Trust me;-)

This photograph should be condemned by every decent human being (of which there are few). It just shows to the world that Israel is no better then those it calls its enemies.

It is a disgusting indictment of what happens when religious fanaticism and extreme nationalism combine. Israel is no exception. In fact it is a world leader in extremism and barbarity!

I would have thought that you leftards would have endorsed this exercise in self esteem reinforcement.

"Now children. You know those people who keep raining down rockets upon us, kidnap our soldiers without declarations of war, blow up our people on buses on the way to school or work, behead settlers or any civilian if caught, and horribly multilate our dead and ululate over their deaths and name their children after the bombs they send our way? Well, today we're sending some of their love right back at them and you all get to send them a message. Won't that be fun."

Thanks for the tu quoque apology, splatterbrain.

Pat, the Sydney Morning Herald is not Hezbollah. Yawn. But I can understand why you'd try to divert attention away from the issue at hand. It is rather embarrassing for your political position.

djeb, you're comment has flown way over my head ,like a directionless qassam rocket, and no doubt exploded with meaning in some schoolyard or blog somewhere else.

If you do care that your comments are understood, I'm afraid I need further explanation of your quite enigmatic statement. Or perhaps, like Hezballah, you don't care where your bombs land. The logic of eternal war is enough.

You're right, really, Pat and Splatts' best defence of this obscenity is a rather childish 'but maaa, they do it too'.

C'mon, demonstrate that you have some boundaries, some lines you'll admit shouldn't be crossed.

Armaniac, it is not a matter of "they do it too". As for lines being crossed, the Israelis employ targeted strikes not random missile strikes.

Why are you all shrill about some Jewish kids writing on a bomb when you never seem to get your skirts up about Jewish kids being blown to bits on a bus by a suicide bomber?

The answer I believe is that you have taken sides with Hezballah and Hamas because they are your underdog. The leftist mindset runs along simply laid tracks.

I haven't read your justification, or shrill denunciation, for the killing of our fellow citizen, who just under a month ago was kidnapped and shot. I'd be interested to hear it.

I don't appreciate being falsely accused of taking sides with groups who, if you read just a bit of my blog and my comments elsewhere, you would know I condemn clearly as terrorists.

I do also appreciate the difference between targetting military and targetting civilians.

The killing you refer to is nasty, and I do condemn it. I also condemn your attempt to find parity between the slaughter of hundreds of civilians and the killing of a trainee soldier.

I'm pretty tolerant but if you accuse me again of being on Hizbollah's side I'll hit the delete button.

You might want to note that I'm one of the few bloggers who, while running strong condemnation of Israel's current actions, has written a post where I agree that they are in an invidious position and attempted to find some middle ground.

Ease off the sneering references to tards and ott allegations, thanks.

The key phrase in my comment about your reasoning would be "I believe". Further I asked for an explanation - which you have given.

Armaniac, you dole out a helluva lot of hyperbole against the Israelis (and conservative support) which, for me at least, leaves any reasoning you might have clouded under that hysterical miasma. (Which is entertaining never-the-less). No need to start threatening me with the delete button.

Surely what's good for the goose is also good for the gander? You're quite an interesting read at Polemica with your slurs of the right, of which I take no offense nor request Guy delete.

Back to the situation, there is no "parity between the slaughter of hundreds of civilians and the killing of a trainee soldier" being sought. The point is how is Israel meant to respond to this ongoing slaughter of its civilians. The case I draw your attention to is but one of hundreds.

You have already taken Hezballah's word as gospel that of all the people killed in Lebanon only 4 were Hezballah. Israeli perceptions differ. Why don't you publish their explanations of the numbers since you portray yourself as even handed?

You could start with last nights "Lateline" interview with Barach.

A fair reply. Doling it out heavily on the issue, or against lefties in a blanket fashion, is ok to a fair stretch of a point.

I found that particular slur OTT, however I haven't deleted in, just flagged that I may have limits in my tolerance there.

Guy can do as he pleases at Polemica, likewise moi and this site.

As to the substance, I do acknowledge that was a preliminary stat, I will hunt for updates where I can find them.

If I was 100% anti Israel then I wouldn't have made out an argument on a previous post (which has been linked by Harry, a leading pro Israel site) for why they may be justified building a wall, creating buffer zones etc.

It should always be remembered that Israel merely wants to exist and does not wish to impose itself on the region. Her defence capabilities have been designed to ensure that. Likewise, Hamas' stated position is the obliteration of Israel as is the same goal of Hezballah. Israel has two options - cease to exist or fight to exist, and those options have been forced on her.

The Palestinian dilemna is a facade perpetuated by the Islamic countries of the region who also do not wish to see Israel exist. Neither Jordan, Syria nor Egypt will accept as refugees post 1967 Palestinians. They use the situation to fight their proxy wars.

The Israelis left Southern Lebanon in 2000 and withdrew from Gaza as a statement of goodwill, giving up a buffer zone that served for her protection. What is happening now is the direct result of the Israelis foolishly thinking they could appease the international community with their unilateral actions.

Bluntly, the entire Islamic region does not want a Jewish Israel. Israel is more than strong enough to obliterate much of the region if it so desired. Instead it fights with one hand restrained and sacrifices its citizens regularly to accomodate the west's demand for appeasement.

For a strategic summary of why the Israelis have targeted those areas hit I would highly recommend the blog Belmont Club. All you will get from the MSM is partisan boosting of the poor old Hezballah and Palestinians.

If there is disproportionate numbers of dead on either side, at this stage it is because one side values its people more than the other. One side is a nation state that uses normal warfare methods. The other straps bombs on retarded children and sends them into shopping markets to detonate themselves and murder those around them.

One side acts with logic, reason and restraint. The other acts from a position of blind idealogical hatred and will never relent until it is either victorious or defeated and will use *any method whatsoever* to achieve its goal - the annihilation of the Jews in Israel.

Well argued, and much of what's there I agree with.

The Gaza withdrawal is a damning indictment of both Israel's enemies and those who try to apologise for them.

It has made me conclude that some small buffer would be a legitimate unilateral response, and you won't find many lefties saying that.

A buffer by definition would not be used to create settlements, it should be added.

And while SB correctly points out that they'd have to take hundreds of kms to put the rockets out of range, I believe even a few kms of territory would allow them to develop their anti rocket capabilities to a fairly protective level.

Terrorists are such fuckers to deal with because they do not play by the rules, and have themselves no moral boundaries. Which is precisely why there is no advantage, in my view, to making genuinely innocent civilians pay for their crimes.

PS Pat you are always welcome to comment here.

That is a truly disturbing image. I pity those poor children, who cannot truly understand what they are doing, but whose minds and attitudes will be shaped by those of their politicians, parents and the actions that they are told to commit.

What kind of future do you have when you train a child to participate in the killing of innocents?

Thank you cristy for getting back to the point I originally commented on. The children of all sides of this insanity are the ones who will pay the greatest price.

The slaughter of civilians and the destruction that is going on all over Lebanon has little to do with rockets. It has to do with Israel's newest attempt to dominate the whole region using brute force. Syria will be next followed by Iran.

Israel, supported and armed by America, will stop at nothing to fulfil its fanatical ambitions. If these are "The Children of God" then it doesn't say much about either their God or religion in general!

Who is to blame for this set-up/beat-up?

Another triumph of the MSM.

Read the update on the same post Splatts... it was, as I originally suspected, the PARENTS of the kids who set it up.

It does modify it slightly. Still, I can see why the kids want to send a message to Naslallah. The problem is with the adults who let them near the rockets.

Oh yes we agree on that, the problem IS with the adults. On both sides.

And it's these little ones who will be suffering if (as seems more than likely) nothing has changed in 10,20,30 years.

Hi Armaniac, I meant to get back earlier but life got in the way. Thanks for the welcome to comment, it's very much appreciated.

No probs, I aim to maintain a friendly blog!