For your granddaughter, the love of my life.

For your grit and determination, crucial in your escape from the jungle following your plane crash in WWII.

For being a good husband to Mammar, so that you could have a huge family together.

For your stellar career as the brains and technical skill behind a decade of Australian legislation introduced by both political parties- yes, your work on the Trade Practices Act and Family Law Act has, with a few bumps, held up and changed our society in myriad ways.

For being a warm and welcoming grandfather to me in the short space of time I knew you.

Your line continues, your great-granddaughter is nigh.

I work. I eat, I sleep and I work again.

Adapting is hardest for the cats, because while I may be phenomenally lazy when it comes to matters of domestic duty I have infinite patience for watching the cats play outside, scratching the sweet spot just behind or in front of their ears, throwing balls of paper or swinging Mr Bear (bear on a string, 'nuff said!). 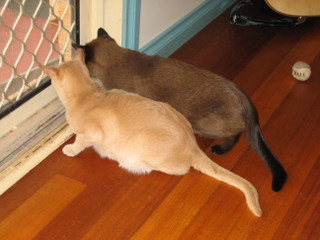 I know, they aren't the cutest cats ever in the whole world, I just happen to be biased.

I am busy, I neglect my blog, cats, guitar, wife, other important matters. Not in any order of importance, I hasten to add. I'm not having a Leunig moment.

My cases are interesting. But I've gone in at a decent level so the expectation's on to get up to speed. The law in this field is vast and dense; I'm enjoying the intellectual challenge but it's intimidating. I read the work of others and I find errors of law. I set higher and higher bars for myself and find there isn't enough time in the day.

There is never, ever enough time in the day.
Posted by Armagnac Esq at 4:50 pm 7 comments:

Beazley is getting off lightly

This may be the end of his career, and that would be a damn fine lesson in polical cynicism. He's getting off lightly because people are not really shining a light on what it says about the man who wants to lead the nation.

It says he really didn't know anything about the people involved. It says he doesn't watch or know anything about Rove, or Belinda, and is generally out of touch. Not a mortal sin in itself. It also says he's had no interest at all in the tragedy of Rove and Belinda, and her battle over many years with breast cancer. That he skimmed those bits to get to the serious news, considered the story too plebian.

Celebrity culture may be pretty vaccuous, but their struggle is a genuine tragedy and one that's moved most of the country. You don't have to like Rove's show much to know he's gone through hell, to have followed the story of that hell in at least some basic detail, to have put yourself in his shoes, thought 'what if I lost the anchor of my world, the keeper of my heart?'

His eyes, in the funeral photos, are the embodiment of hell on earth. They are filled with the anger we'd all feel with someone close torn away by something so random and unjust.

Beazley clearly wasn't all that moved, preferring to move on to read about his mate Murdoch's latest acquisitions in the business pages or what brilliant things his favourite nation the US of A was doing in a given week.

But, when she died, he still wanted to make a bit of hay. Well, the hay's on fire, Rudd's circling at last, and frankly that was just one misjudgement too many. Not the name error, but what it, in this context, tells the electorate about him.

Most of the media attention just seems to have focused on this as 'another Bomber gaffe'. But it was not just a gaffe, and it's so much more this time. And the public, who care a great deal about the Belinda and Rove tragedy, will see it for what it is.

Rudd, Gillard, your moment may arrive 12 months earlier than you expected...
Posted by Armagnac Esq at 3:40 pm 5 comments:

This is one of the most important cases with respect to the relationship between the Commonwealth and the States to come before the Court in all of the years of its existence. If the legislation is to be upheld the consequences for the future integrity of the federation as a federation, and the existence and powers of the States will be far-reaching. The Act in its present form is well beyond, and in contradiction of what was intended and expressed in the Constitution by the founders.

Kirby in full flight? No, these are some of the opening words in the judgement of Callinan J, political and jurisprudential conservative, and on first blush the only Justice of the High Court capable of sticking strongly to his judicial approach when it contravenes his (alleged) political leanings.

The conservatives' Mabo has been handed down.

Kirby is the only jurisprudential radical on the bench. It is his judgement, and his alone, that should have drawn the long bow from the short clear expression of power,

The Parliament shall, subject to this Constitution, have power to make laws for the peace, order, and good government of the Commonwealth with respect to...

(xx) foreign corporations, and trading or financial corporations formed within the limits of the Commonwealth;

so that it confers the ability to regulate industrial and employment law at all levels, despite the fact that the founding hobnobs chose to make only the following clear reference to industrial law,

(xxxv) conciliation and arbitration for the prevention and settlement of industrial disputes extending beyond the limits of any one State;

within that fine piece of British legislation.

Instead, and once again I stress that this is at first blush (I have all 200-odd pages in front of me but will not have read it until at least midnight!), Kirby supported the black letter conservative position (judicially speaking) that matched his more radical politics.

And the much-lauded judicial conservatives, with the exception of Callinan J (only HE gets the 'J' today), brought down a decision that is radical in its reasoning, centralising power, supporting the grasping expansion of the Commonwealth over the States, neutering the Federation and performing astonishing acts of hermeneutics on a group of words that clearly contain, by intention, no reference whatsoever to industrial or employment law.

It's early days. I'll read the decision. I'll wait with bated breath for Janet Albrechtson to scribble furiously about the decline of the judiciary and the need for a return to genuine judicial conservatism.

Only one judge has the right to adopt that mantle now.

(More analysis to follow on this topic in coming days...)
Posted by Armagnac Esq at 8:17 pm 6 comments:

To fight another day

Pampar has, against the expectations of all in hospital and most who know him, beaten both death and the suffocating pools of water death placed in his lungs.

Mammar thought she lost him when his plane went down in the war. He pulled through then, he's pulled through again now. I thought he might, he's had his mettle tested many times and isn't likely to go easily.

I wonder if he's hanging out to meet his first great grandchild. It's a long time when you're blind and your organs are trying to pack up and retire on you, but I have my fingers crossed that he'll make the next couple of months and at least hear the news that he's paved the way for 3 subsequent generations. Better yet, we'll fly up there as soon as beloved is able and he can hold her in person.

Two ends of a lifeline arcing towards each other. Separated by the vicissitudes of birth and death.
Posted by Armagnac Esq at 6:19 pm 5 comments:

They hold hands until death passes

Beloved's dear Pampar lies in hospital. His prognosis is not good, though we are talking about a man who was missing presumed dead in the war, who went on to advise Federal Attorneys-General and help shape the laws of this nation. So I'd say he's got a fair reservoir of fight.

But still, it isn't good.

His marriage saw out the majority of last century as well as all of this one. Mammar sits next to him now, in hospital, holding his hand. They still do that, holding hands- beloved and I took a sneak photo of them walking along the footpath in Civic, Canberra, like a pair of teenagers in crush.

Not all beautiful things fade with time.

His first great grandchild is only a couple of months from bringing new life into the world. He may never see her. I hope he knows that she will know all about him.

Mammar is still holding his hand, I wish I could give her a huge hug now and hold on until it all passes, until death moves on, with or without the man she's loved for so many decades.

We're all proud of Pampar, I hope he knows that. I'm proud to have known him as a belated grandson.
Posted by Armagnac Esq at 7:36 am 4 comments:

Some slime. No connection, just exasperation...
Posted by Armagnac Esq at 10:19 pm 3 comments:

Hundreds of procedures, institutional foibles and idiosynchratic quirks are wizzing around my tiny brain following my launch into the new job. I cannot, of course, discuss detail as always, but I'll say enough that it's pretty interesting so far. I apologise for scant blogging, including visiting others (bloglines has sat dormant for a couple of weeks!). A thought of the day on each of my favourite topics...

Cancellation of The Glass House ranks alongside pulling the Jones book and the Safran episode on tar-coif as low water marks in the ilLiberal era of right wing political correctness and censorship. There is so little to compare to The Glass House that the argument it's being pulled to make way for fresh creativity is transparent bunkum. Labor should indicate an intention to go after individuals who abuse their power so blatantly and hold them accountable- retrospective legislation and a royal commission should do the trick.

Missed the Fisherman, the doco that inspired a defo case I've discussed recently, but it's covered by the Legal Soapboxer.

My daughter is coming along nicely, gave a few kicks as I hummed to her tonight, which I believe was her trying to burrow her way to silence through the back of beloved's womb.

And I jammed with the boys for the first time in months and months. With 2 of the 3 of us close to fatherhood, we may end up becoming the alternative version of the Wiggles so we can justify practicing, but any chance to belt something out would be a welcome diversion from the statute books.